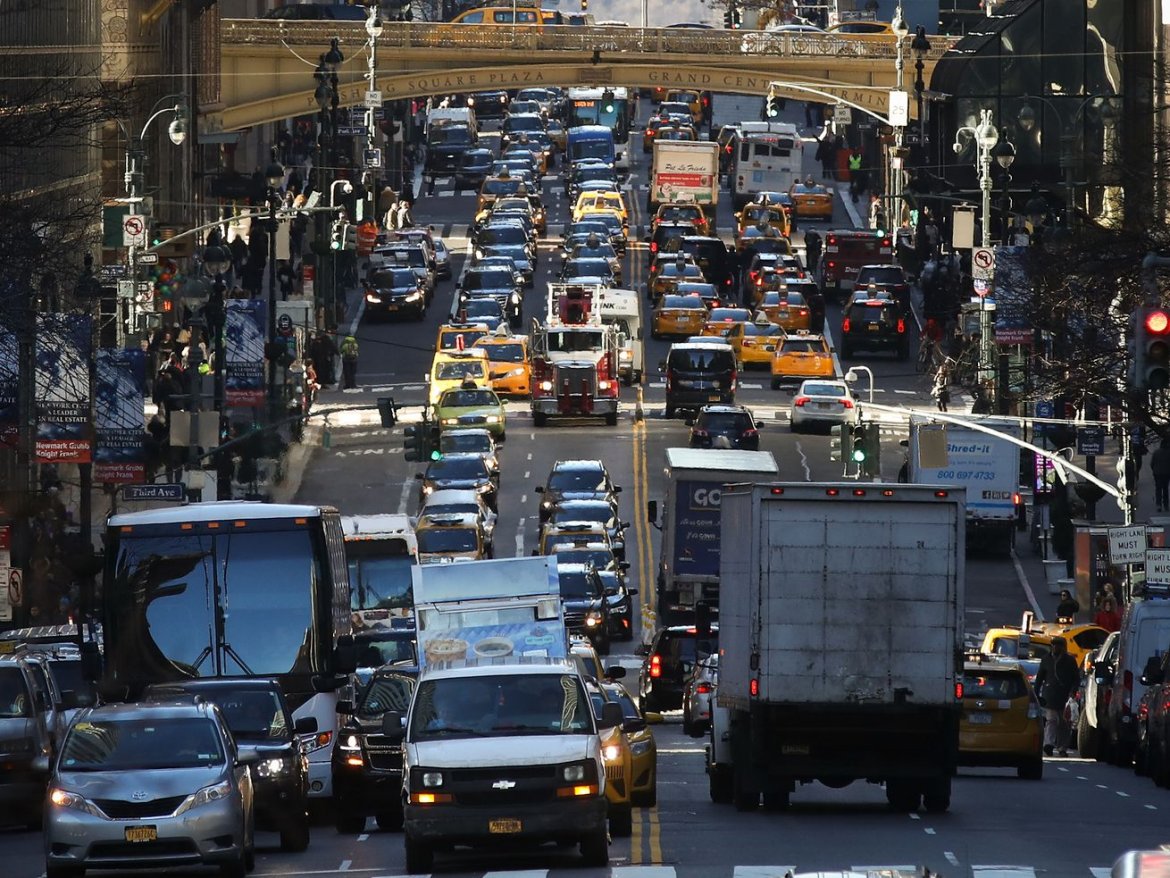 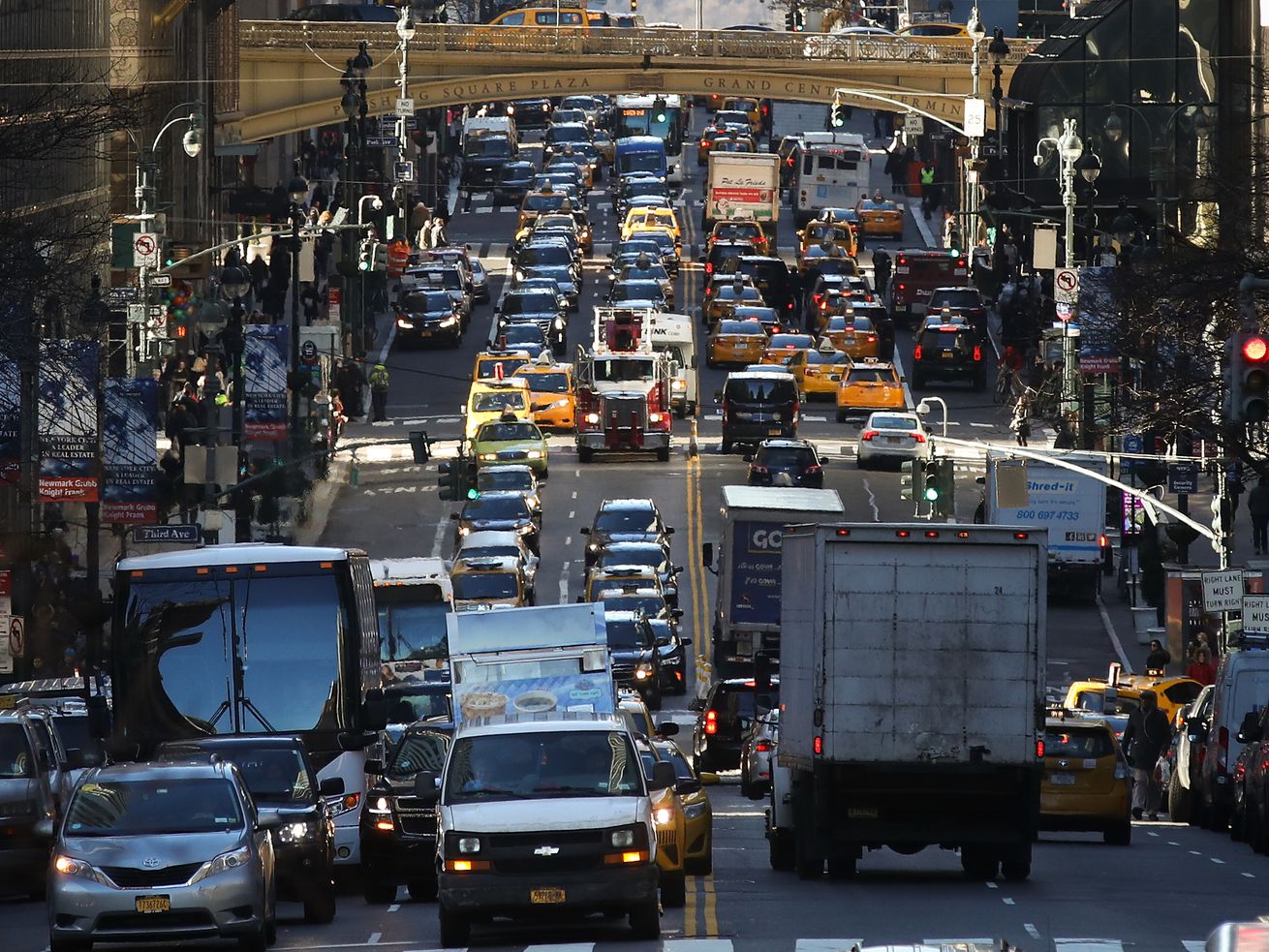 The tolling system won’t be up and running for “roughly a year.”

Last year, when New York became the first U.S. city to welcome congestion pricing, it was the culmination of over ten years of raucous policy debate, political maneuvering, and long-simmering vexation because of the city’s battered subway system.

The landmark plan, which was authorized by the 2019 state budget and anticipated to launch in January 2021, would require drivers to pay a surcharge to enter certain heavily trafficked Manhattan neighborhoods and was expected to raise up to $1 billion annually in fees to help the MTA pay for sorely needed improvements to mass transit. A model that, as some New Yorkers opt for private cars over a return to cramped subways and buses owing to COVID-19, is key to curbing bumper-to-bumper gridlock in Manhattan’s core.

But now the plan that was so crucial to the health of the city’s mass transit system will face “roughly a year” of delays due to holdups with federal officials, says the MTA’s chief development officer Janno Lieber.

“We’ve literally hired the consultants. We’ve designed the systems — the cameras and so on that are going to be implemented,” Lieber said during a Monday webinar with the Manhattan Institute. “We just can’t move forward without Trump administration action.”

The electronic tolling system must be approved by the Federal Highway Administration (FHWA) before it can be implemented, but in pursuit of that approval, federal officials need to determine what kind of environmental review process the MTA is required to conduct.

The federal agency has failed to do so for more than a year. An FHWA spokesperson told Curbed that the state’s proposal “requires thorough consideration and review.”

Now, in the midst of the novel coronavirus pandemic, transit officials don’t expect congestion pricing to be a priority for the Trump administration. Lieber noted that once the MTA gets the green light to physically set up the system, it will take at least a year after receiving that approval for the state agency to implement the pricing model. “The software needs to be created and put into effect, and that’s what takes a little time,” Lieber added.

The plan to toll vehicles south of 60th Street is intended to fund $15 billion of the MTA’s $51.5 billion five-year capital plan, which includes the rapid modernization of delay-inducing subway signals and accessibility improvements to 66 subway stations. MTA chairman Patrick Foye has, for months, said that having congestion pricing in place by January 2021 was “unlikely,” but Lieber is the first MTA leader to put a timeline on the delays.

Due to dire financial straits spurred by the pandemic, the MTA has already extended a 60-day hold on capital projects, which it initially unveiled in March, as the cash-strapped agency seeks to secure an additional $3.9 billion in emergency federal aid. The MTA received $3.8 billion in federal funding in May to plug budget shortfalls as ridership dropped to historic lows during the height of the pandemic in New York.

Tom Wright, president and CEO of the Regional Plan Association, stressed that it’s essential to realize that congestion pricing is “absolutely vital for the near-term and long-term recovery of the region,” and, without it, the MTA “faces another massive hit to their already starved budget.” But congestion pricing could also act as an important deterrent for driving in Manhattan’s core, as some New Yorkers who are uncomfortable with a return to mass transit in light of COVID-19 switch to cars.

That could translate to staggering gridlock, even if only a small percentage of subway and bus riders chose to rely on private cars or for-hire vehicles to get around the city. “As reopening across the region continues and more people use their own cars to get into the city, we need to make sure that the benefits of decreased carbon emissions, less traffic, and generated revenue for our mass transit system remain a priority,” adds Wright.

In October, the MTA finalized a $507 million contract with transportation-technology company TransCore to build out much of its congestion-pricing infrastructure. That’s along with in-house MTA staffers who have spent the past year planning for the new system.

But when congestion pricing does eventually launch in New York, it is unclear if all of the revenue generated will now go toward the MTA’s capital plan. An executive order issued by Governor Andrew Cuomo in March permits the MTA to use capital funds meant for infrastructure projects to cover day-to-day operating expenses, now that the agency is in a staggering budget hole that is expected to exceed $7 billion by the year’s end.

Transportation and accessibility advocates fear that could mean a siphoning of funds from crucial infrastructure projects and station upgrades such as elevators and ramps.

“We fought for congestion pricing, and now we want to safeguard that money and other funding for transit accessibility,” Christine Serdjenian Yearwood, founder and CEO of accessibility advocacy group UP-STAND, said in a statement. “This is about quality of life, health, and safety, and it impacts us all.”

Accessibility and other capital improvement efforts remain an MTA “priority,” Lieber said during the webinar. But the chief way to ensure cuts to such projects don’t happen, he noted, is to push the Trump administration for greater federal relief for the agency.

“As much as we want the money central-business-district tolling will provide for the capital program, we have to keep the lights on,” said Lieber. “And that depends on our operating-budget deficit being addressed by the federal government right now.”