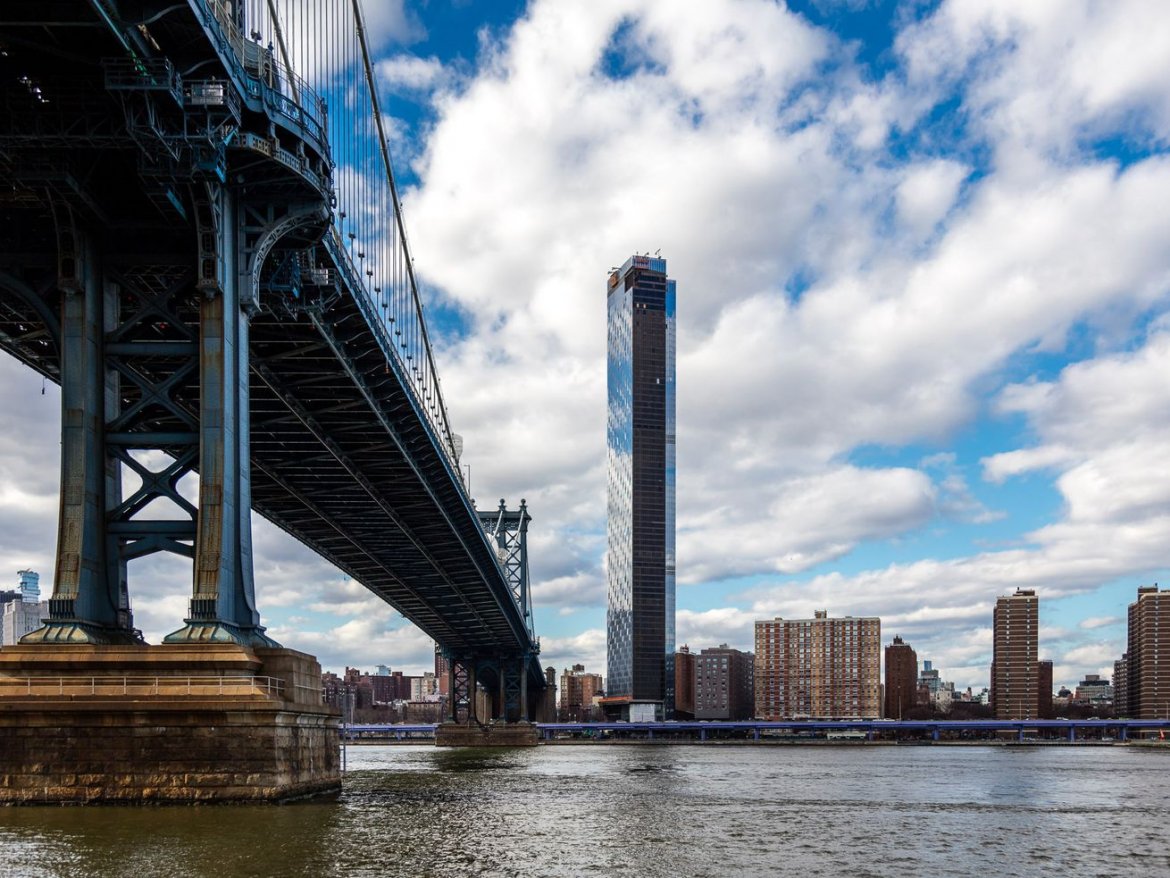 That Infamous Trio of Two Bridges Megatowers Inches Toward Construction 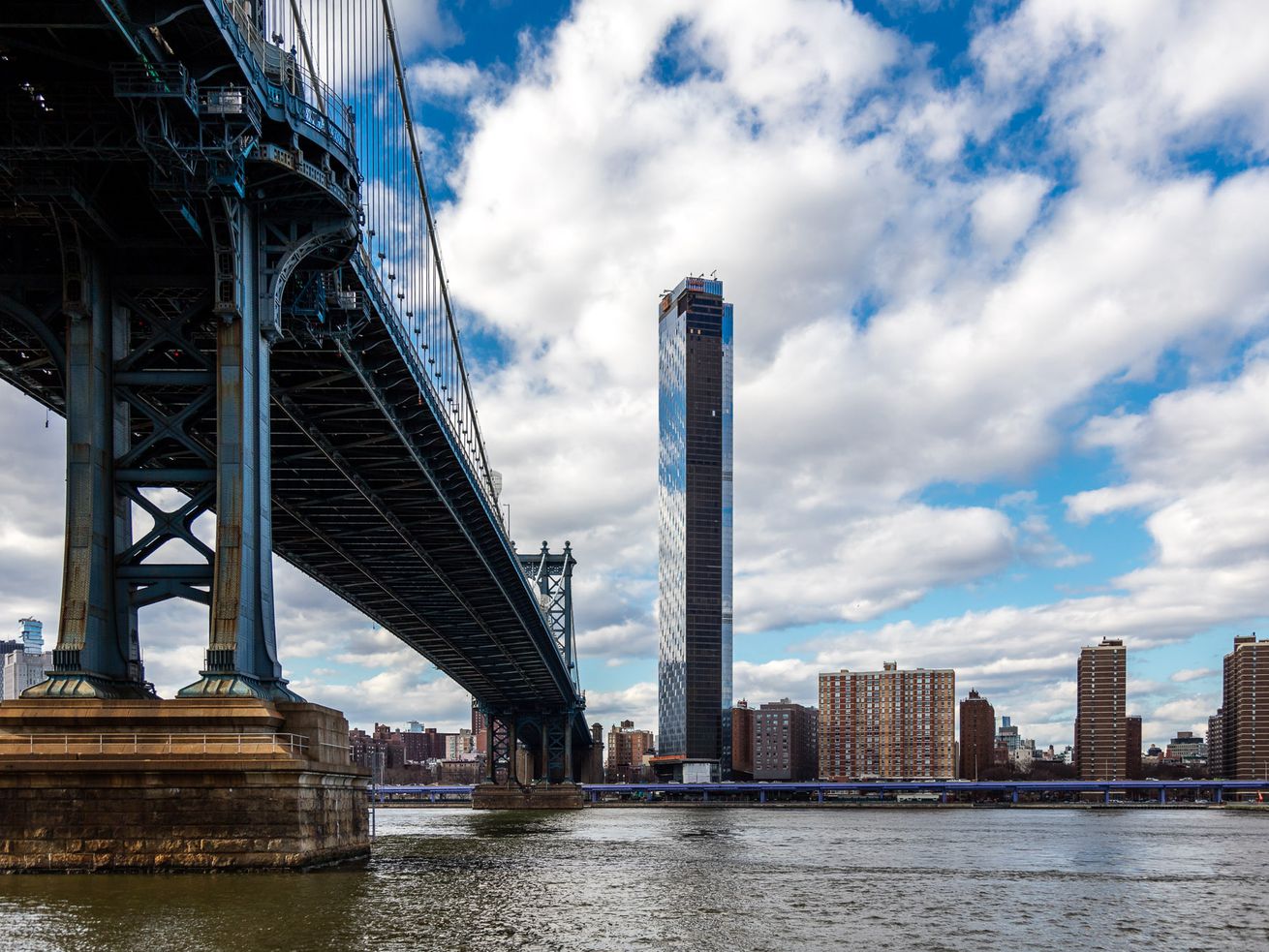 Three new luxury skyscrapers — one set to be 100 stories tall — got the go-ahead from an appeals court, but two more lawsuits are pending.

The middle- and lower-income Lower East Side neighborhood known as Two Bridges is one step closer to becoming home to three new enormous waterfront apartment towers 70 to 100 stories high. They’d become a set with One Manhattan Square, that glass condo monolith with a private driveway that already crowds the base of the Manhattan Bridge on the site of the neighborhood’s onetime Pathmark grocery.

After nine months of legal challenges, an appeals court has struck down a ruling that had blocked the megadevelopments, but construction is still on hold and will be for at least several more months while two other lawsuits work their way through court. Whether in a post-pandemic Manhattan there will be a market for these luxury high-rises has yet to be determined: Already, One Manhattan Square hardly lights up at night with residents.

The court decision is a notable win for the developers behind the projects — JDS Development Group, L+M Development Partners, CIM Group, and Starrett Development — that would bring 2,775 apartments to the area (25 percent of which would be set aside as affordable housing), along with upgrades to the East Broadway subway station, a nearby NYCHA complex, and three neighborhood parks.

However, critics have argued that the new towers, vastly taller than the brick mid-century buildings there now and casting neighboring open space into shadow, would overburden the area’s infrastructure and transform one of Manhattan’s last neighborhoods traditionally within reach of low- and middle-income families.

Back in 2018, the City Planning Commission approved the colossal development plans without the applications going through the nine-month Uniform Land Use Review Procedure (ULURP). The developers’ applications to raise the skyscrapers, the commission said, only represented a “minor modification” to the Two Bridges Large Scale Residential Development district.

But last summer, Manhattan Supreme Court judge Arthur Engoron ruled that the area’s development restrictions did not permit the three planned projects. Engoron, who called the minor-modification logic “somewhat Orwellian,” sided with a lawsuit brought by the City Council and Manhattan borough president Gale Brewer that called for the building proposals to go through ULURP. Doing so would give lower-Manhattan councilmember Margaret Chin — or whoever is elected to that seat in 2021 — the power to halt or negotiate the project through a make-or-break vote by the City Council. For land-use matters, the council typically follows the lead of the local representative.

But an appellate court ruled Thursday that the City Planning Commission’s approvals were “rationally based” and that the panel’s decision not to put the towers through the lengthy land-use review process was legally sound.

In a joint statement, the City Council and Manhattan borough president stressed that the purpose of their lawsuit was to give locals “a seat at the table” by requiring the ULURP process and that they are “evaluating” a potential appeal.

The de Blasio administration, which has touted the projects’ affordable housing, and the consortium of developers each applauded the court reversal, but the towers are still a long way off from having the green light to break ground. Last week’s judgment only applies to one of three lawsuits brought against the skyscrapers.

A pair of separate legal challenges filed by two coalitions of community groups also sought to annul the City Planning Commission’s approvals. But rather than push for the towers to go through ULURP, both suits argue flaws in the developments’ environmental-review process and zoning violations. Engoron ruled in favor of both cases in February; the city and developers have since appealed those decisions.

The two community-driven lawsuits — respectively led by Tenants United Fighting for Lower East Side (TUFF-LES) and Lower East Side Organized Neighbors (LESON) — would require the City Planning Commission to determine how the towers would impact the area according to a specific zoning provision (ZR 78-313) before they get the go-ahead. Meaning the developers would have to show that the residential towers — which include a supertall planned to soar more than 1,000 feet — would not “unduly increase the bulk of buildings, density of population, or intensity of use in any block” and that, among other things, they would not “impair the essential character of the surrounding area,” according to the city’s zoning code.

Paula Segal, an attorney with TakeRoot Justice who represents TUFF-LES, says the appeal will likely be considered in November at the earliest. “Those decisions remain a barrier. There’s a lot of steps between here and construction,” she says.

Meanwhile, New York’s real-estate market is experiencing tectonic shifts induced by the COVID-19 pandemic, with vacancies rising and prices dropping in Manhattan. Even before the virus hit New York, One Manhattan Square, with 815 units, was struggling to find buyers; condo prices had ranged from $1.2 million for a one-bedroom to over $13 million for a penthouse in 2019.

The owner, Extell Development, had only managed to sell about one-fifth of its units this time last year. To entice buyers, the firm launched a rent-to-buy program last September, and in May, Extell slashed the prices of all remaining units by 20 percent.

Locals have said they hope the Two Bridges lawsuits drag on long enough for a grassroots neighborhood rezoning proposal to push forward. The plan would cap all buildings at about 35 stories in the area from Catherine to Montgomery Streets between South and Cherry Streets and require that half of the units in new residential construction be permanently affordable for low- and moderate-income residents.

“We’re confident we can get it done, but we’re still racing against the clock,” says Two Bridges resident and TUFF-LES board member Trever Holland. “It has always been about time — buying time for the neighborhood.”