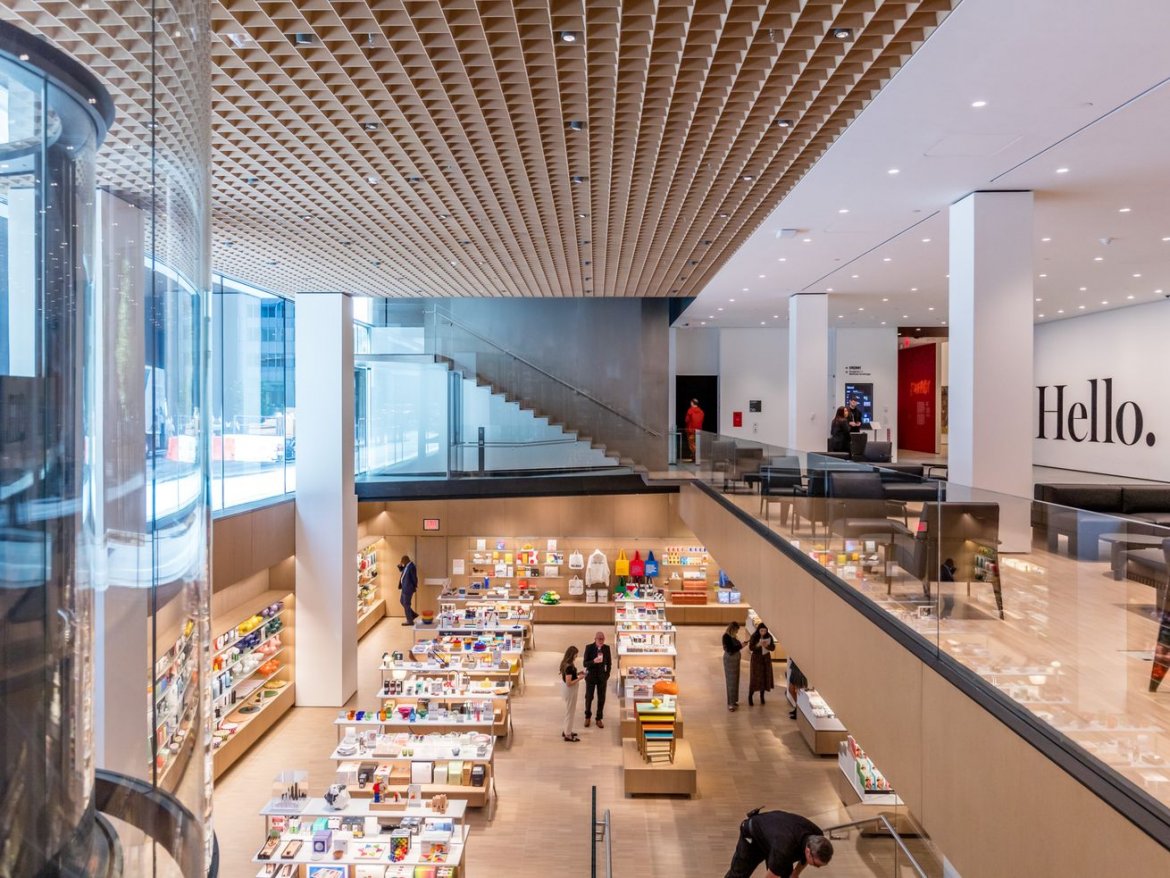 Inside the Museum of Modern Art’s newly renovated Midtown HQ 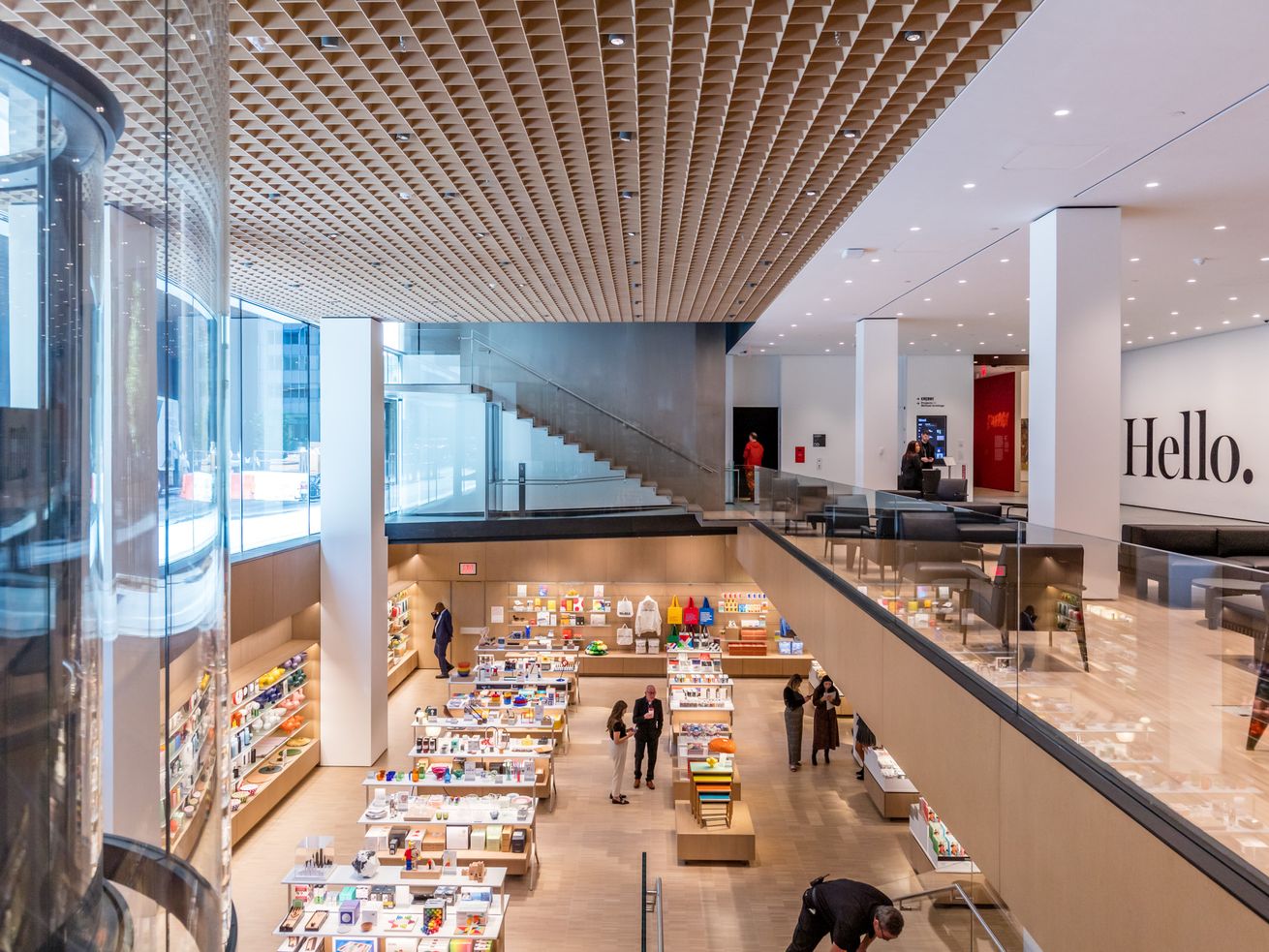 A new, open lobby with a below-ground museum shop.

For as long as the Museum of Modern Art has been an institution (90 years as of 2019), it has been tinkering with the spaces that it inhabits.

The museum was originally located in the Crown Building at Fifth Avenue and 57th Street, and moved a few blocks southeast in 1932 in search of more space. But it quickly outgrew that location, and in 1939, the first iteration of its current 53rd Street headquarters—an Art Deco building designed by Philip Goodwin and Edward Durell Stone—opened its doors. Subsequent additions and renovations—by Philip Johnson, César Pelli, and most recently Yoshio Taniguchi—expanded the museum’s footprint, to varying degrees of success.

And now, the museum is about to reveal its most ambitious revamp yet: On October 21, MoMA will open its expanded headquarters, which now takes up most of the block on 53rd Street between Fifth and Sixth avenues. The museum has pushed westward, opening more than 40,000 square feet of fresh galleries in both a ground-up building (which rose from the ashes of the Tod Williams Billie Tsien Architects-designed American Folk Art Museum) and the base of Jean Nouvel’s supertall skyscraper next door.

The galleries aren’t all that’s been added, though: The museum has also opened a new, expansive lobby—which has two galleries that can be visited free of charge—as well as a spacious gift shop that has been relocated below street level. A wall of windows gives passersby a glimpse into the space, and is intended as a gesture of “increased transparency,” according to the museum.

The renovation was overseen by Diller Scofidio + Renfro in collaboration with Gensler, and that team had the unenviable task of knitting together many disparate spaces—the new galleries (which are part of the David Geffen wing), the pieces of the original Durell and Goodwin building, the lobby of the Taniguchi building, the Johnson-designed sculpture garden—into something resembling a cohesive whole. It is mostly successful, if slightly overwhelming; a two-hour visit before the museum opened to the public hardly felt like enough time to take everything in.

That’s largely due to the fact that MoMA has made more of its collection than ever available to visitors. The collection galleries, which are spread out across three floors, hold thousands upon thousands of artworks; painting, sculpture, video, drawings, and more all coexist, with a “general chronological spine” (MoMA’s words) pulling it all together. Many of the museum’s most popular pieces remain (Monet’s Water Lilies, Andy Warhol’s Campbell’s soup cans, The Starry Night, and so on), but have been augmented by the addition of complimentary pieces, or ones that are meant to provoke discussion. An entire gallery is devoted to Pablo Picasso’s revolutionary Les Demoiselles d’Avignon, for example, and one of the pieces hung near it is Faith Ringgold’s extraordinary American People Series #20: Die—an abstracted depiction of a race riot that’s thematically removed from the Picasso work, but similar in composition. The juxtaposition is striking, and a harbinger of what to expect as the museum tweaks what it hangs in the coming months and years (pieces will rotate out every six months).

There’s also a special focus on architecture and design in this new approach to the collection: Several galleries are devoted to various aspects of those fields, including “The Vertical City,” an examination of skyscraper construction that includes photos by Berenice Abbott, Hugh Ferriss’s architectural drawings, and other ephemera. Elsewhere, building models of the Guggenheim and a spec design of MoMA by modernist master William Lescaze emphasize the importance of architecture to museums, and vice versa.

Of course, there are misfires: The wayfinding in the new museum is less than optimal, and it can be hard to get your bearings in this enormous space. Some of the additions are a bit sterile, with a look that’s vaguely airspace-esque. And unlike the Metropolitan Museum of Art, MoMA has always felt like a space that could be tackled in one visit; that feeling is pretty much gone now, which can be good or bad, depending on how you feel about being overwhelmed by so much art to see.

As Michael Kimmelman said in his assessment of the renovation, you wonder if all of this extra space will not actually help alleviate the intense crowding issues that have plagued the museum as the number of annual visitors has grown (it’s up to three million now). “Expansions tend to bring larger crowds,” Kimmelman writes. “Transportation experts call the phenomenon induced demand: The more lanes you add to a traffic-jammed highway, the more cars will inevitably arrive to fill them.” It’s easy to see MoMA going the same way.

Still, you should pay a visit, even if you’ve been to MoMA plenty of times before—to see the building, yes, but to experience the collection in a fresh way. MoMA director Glenn Lowry said that the new design “allows us to rethink the experience of art in the museum,” and it’s worth seeing how they managed to pull that off.

MoMA will reopen to members this weekend, and to the public on October 21. 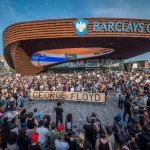 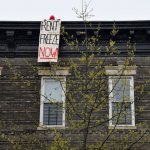 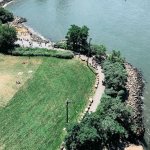 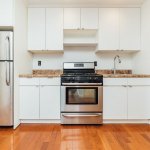 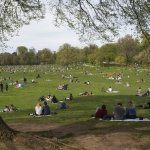 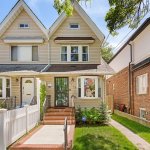 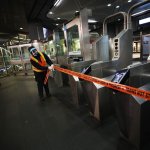 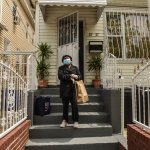 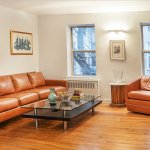 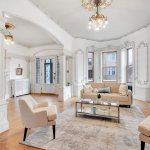