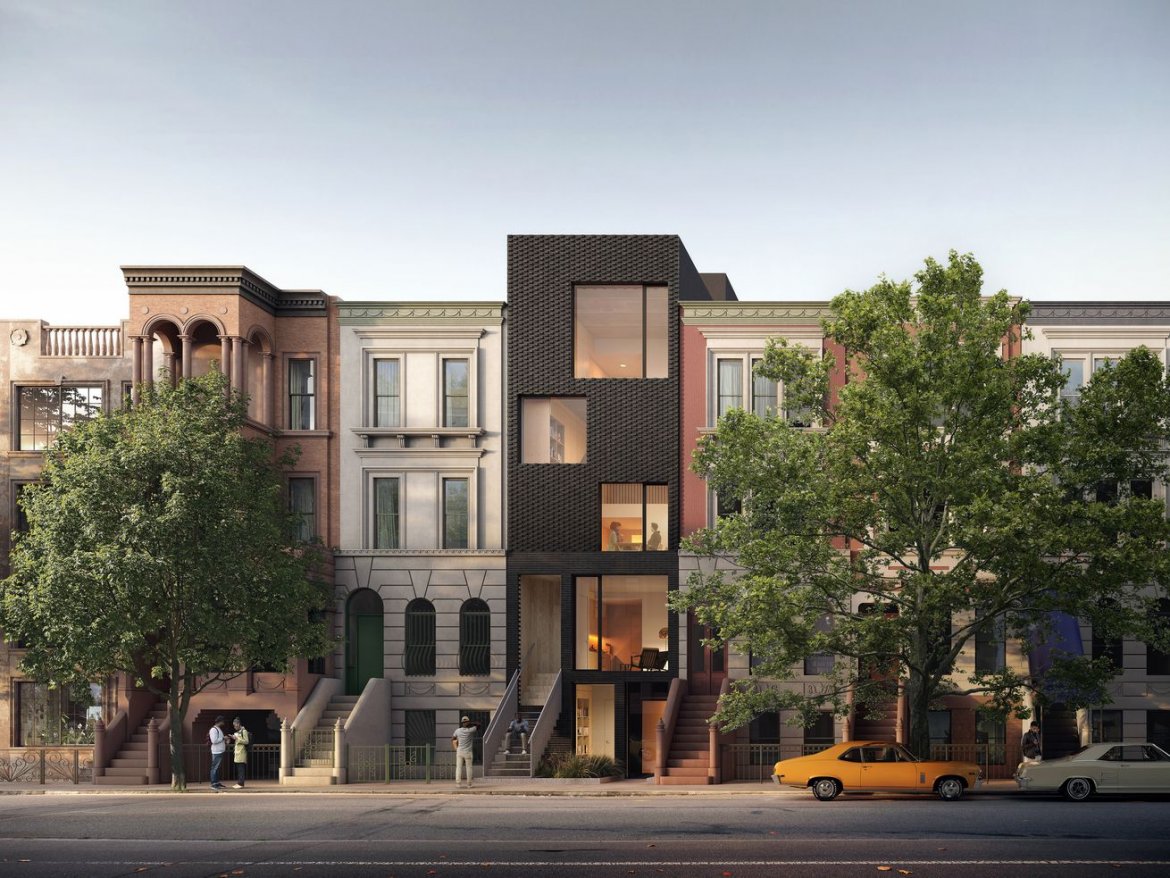 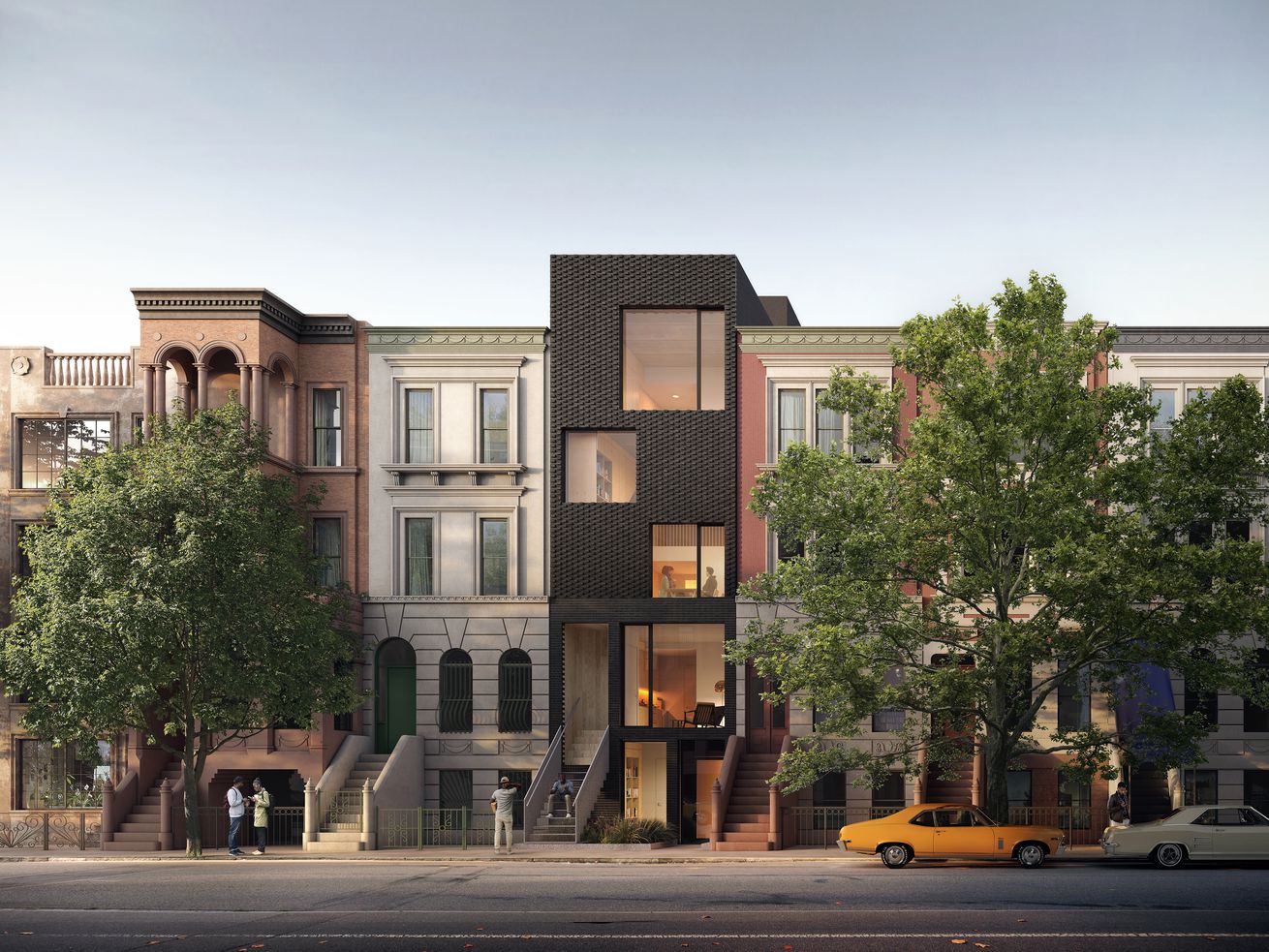 New York City may be densely developed, but there’s still a lot of leftover land hiding in plain sight. By some estimates, there are over 10,000 vacant lots—some of which are city-owned—that are too weirdly shaped and oddly sized for conventional development, and so they remain fallow. With the right design moves, could those sites be used to alleviate the city’s housing crisis? A new exhibition at the Center for Architecture aims to show how it can be done.

This February, the city’s Department of Housing Preservation and Development (HPD) and the AIA’s New York chapter (AIANY) launched the Big Ideas for Small Lots design competition, an open call for architects to design a multi-family project on a vacant lot in Harlem. The five finalists were announced in May, and the entries are on view at the Center for Architecture’s Greenwich Village gallery until November 2.

“With the supply of developable city-owned land steadily decreasing, and the need for affordable housing reaching an all-time high, we’re looking to leave no stone unturned when it comes to finding new opportunities to develop affordable housing wherever possible,” Juliet Pierre-Antoine, a spokesperson for HPD, tells Curbed.

There are a number of reasons small lots are difficult for HPD to develop into affordable housing. On the zoning side, minimum lot widths and maximum heights determine how many units can be constructed; minimum room sizes impact layouts; and natural light and air circulation requirements are challenging in tiny footprints. Stair and elevator requirements take up even more space. Eccentric lot shapes require custom design work that eats into the bottom line for developers, who are accustomed to repeating the same type of construction due to economies of scale. The character of a neighborhood—like one filled with historic brownstones—adds even more pressure since there are restrictions for building in landmarked districts.

Meanwhile, the city released a new housing plan in late 2017 that called for more innovation and diversity in housing construction.

The competition’s brief called for “proposals that demonstrate excellence in small-scale, urban infill affordable housing,” which HPD interpreted as paying attention to details and how residents would experience the space; the building’s durability, energy efficiency, and climate change resiliency; and the relationship between interior and exterior spaces. In other words: Would people love living in these apartments and would the proposals enrich their neighborhoods?

HPD chose a test lot in Harlem measuring about 17 feet wide and 100 feet deep for the architects to create their prototypes, with the hope of eventually adapting some of the finalists’ designs to 23 different city-owned small lots. The entries explore experimental building techniques, like mass timber; unconventional layouts, like micro units and split-level studios; and innovative details, like movable walls and communal gardens, that push the boundaries of what HPD typically develops. The projects reflect compelling, and diverse, visions for the future of affordable housing.

“We were drawn to this competition because it’s architect-led versus developer-led,” says Adam Frampton, a cofounder, with Karolina Czeczek, of the Brooklyn-based studio Only If. “The process HPD uses typically involves development teams submitting their financial criteria and spreadsheets for a project. An architect is only involved in the beginning. Here, design quality has been foregrounded.”

Only If proposed a seven-unit building composed of apartments that could be a mix of affordable or market-rate: a two-bedroom accessible unit on the ground level; micro-studios, split-level studio apartments, and a one-bedroom unit with a private roof garden. They limited the building to four stories so that they wouldn’t need an elevator, which freed up more space for living. To help save on construction costs, the firm envisioned using off-the-shelf materials like concrete masonry units. “We feel it’s important for different types of people to live here,” Frampton says.

Ted Kane, of Kane Architecture and Urbanism, and Jeremiah Joseph, of the firm Anwan/101, collaborated on an entry that took an entirely different approach. “In the Housing New York 2.0 plan, the city said it wants as much housing as possible for elderly people and people with disabilities,” Kane says, so they designed a six-level, elevator-equipped building.

On the ground floor, they designed a communal feature they’re calling the “urban garage,” which includes bicycle storage, laundry, a kitchenette, and garden. There’s no cellar, which saves on excavation costs, and since people wouldn’t be living on the ground floor, damage in the event of a flood wouldn’t be as catastrophic.

Assuming that the actual composition of the building could change depending on HPD’s needs, they conceived of the apartments—studios, one-bedrooms, and a four-bedroom double-height unit—as a “kit of parts” that could be mixed up. The five floors allocated for living could include 10 studios, five one-bedroom units, or two four-bedroom units. To make the most of light and air circulation, they proposed floor-to-ceiling storefront-style windows that can slide open.

Kane and Joseph’s proposal, along with a couple others in the exhibition, specifies mass timber, prefabricated structural components made from cross-laminated timber. The building technique is still new in the United States—and controversial in New York City due to concerns about fire safety—but in widespread use in Europe. They took this opportunity of designing for a city agency to hopefully indoctrinate more innovative construction in the city.

“Any opportunity to build in a city like New York is fantastic,” Joseph says. “But the specific parameters of utilizing odd-sized and small parcels of land, it’s a challenge, and those challenges are quite often the ones that generate the most interesting solutions.”

As the HPD and AIA competition and exhibition shows, the future of affordable housing has no shortage of ideas. The next challenge—and it’s a big one—is moving these ideas from paper into the real world. Let’s hope the the city’s will to build is as strong as the ideas presented.

“Big Ideas, Small Lots” is on view at the AIANY Center for Architecture through November 2.