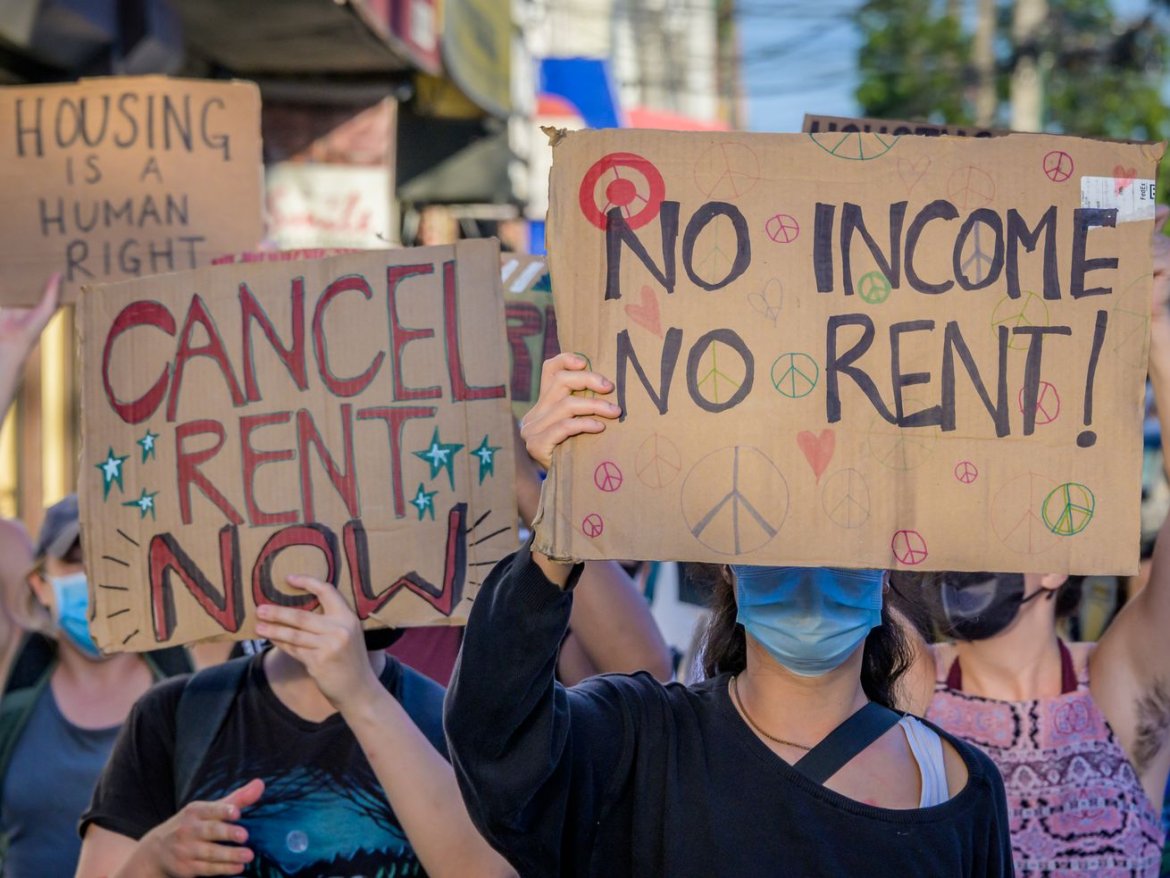 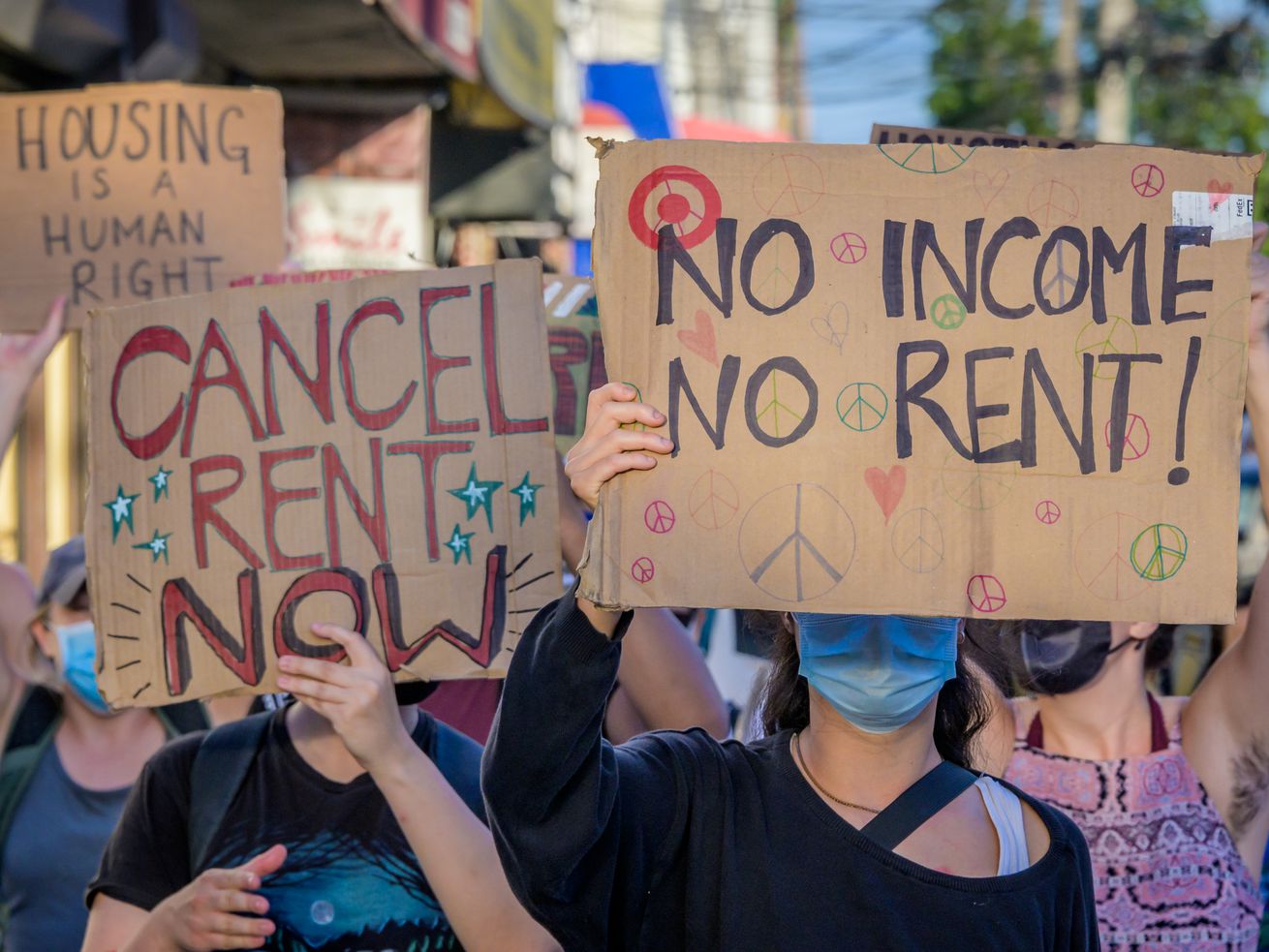 “I lost my dad, my best friend, and the person who paid our rent.”

At the height of the pandemic in New York, Julio Peña woke up early each morning and rode the bus to his job stocking shelves and cleaning at a C-Town supermarket in the Bronx. In April, three weeks after first showing symptoms of COVID-19, Peña died at Lincoln Hospital.

Now — on top of mourning the loss of his father and grappling with funeral expenses — Peña’s son, José, is struggling to get by without his father’s income, which once helped him pay his rent. José says he’s racked with anxiety and unable to afford the two-bedroom apartment in Mott Haven that he shares with his 74-year-old grandmother. So far, he has been unable to pay rent for May, June, and July.

“I lost my dad, my best friend, and the person who paid our rent,” says Peña. “It’s an insult to what he did — going to work to help feed people — that we have so much uncertainty.”

In mid-March, Governor Andrew Cuomo issued a blanket moratorium on evictions, allowing tenants like the Peñas to remain in their homes. But, despite persistent calls from tenant advocates urging Cuomo to cancel rent during the public health crisis, protections have been gradually peeled back.

This week, the governor quietly issued an executive order easing restrictions on new eviction cases, but guidance from the courts stalls proceedings in those cases until at least through August 5. This is just the latest twist in a months-long saga of executive orders that have reshaped eviction protections for New Yorkers, leaving tenants and attorneys alike exasperated.

“It’s like a Talmudic study to figure out what [these orders] mean. It’s ridiculous,” says Edward Josephson, the director of litigation and housing at Legal Services NYC. “I’ve been in the industry for 32 years, and no, I can’t think of anything ever like this.”

Late on Monday, Cuomo signed the latest in a series of executive orders involving evictions. This extended a freeze on the statute of limitations that has allowed the courts’ to temporarily keep eviction cases from snaking their way through the system, while they continue to accept new cases filed by mail.

At the same time, the governor also rolled back protections prohibiting new residential eviction cases for both nonpayment of rent and foreclosure on residential mortgages. (Though, he has let that provision stand for commercial tenants.) Instead, the governor is relying on the Tenant Safe Harbor Act — which provides residential tenants with a defense they can use in court, but does not block new cases from being filed — to serve as New Yorkers’ remaining COVID-19-related protection from eviction.

It’s a worrying shift that some tenant attorneys fear will whittle away remaining restrictions, and may serve as a release valve, causing the current trickle of new cases to speed up into a deluge.

“The Cheesecake Factory going on a rent strike has more protection from the governor at this point than my clients who are unemployed and facing eviction with the courts reopening,” says Patrick Tyrrell, a staff attorney with Mobilization for Justice. “It’s extremely disappointing.”

Under the Tenant Safe Harbor Act, a qualifying tenant cannot lawfully be evicted for the nonpayment of rent accrued between March 7 and the full reopening of their county (that is, so long as the tenant can demonstrate to a judge that they suffered a financial hardship during that period). But while tenants would be allowed to remain in their homes, a judge could still issue money judgements to recuperate unpaid rent accrued during that time.

Tyrrell notes that such judgements could still do “a lot of harm” to tenants who could face having their wages garnished, having liens put against their personal property, or seeing their credit ravaged if they are unable to pay. According to the Office of Court Administration, so far only 13 new eviction cases have been filed since the partial reopening of the city’s housing courts in late June, but tenant attorneys estimate a minimum of 50,000 cases may be filed once operations fully resume.

On Wednesday, the courts inched closer to that reality when guidance issued by New York Chief Administrative Judge Lawrence Marks eliminated one of the barriers limiting new cases. According to the memo, landlords and their attorneys no longer need to submit an affidavit stating their tenant was not financially impacted by COVID-19 to move forward with a new nonpayment case.

The Rent Stabilization Association, a real estate trade group that represents 25,000 property owners and agents, said the change eliminates “a major impediment to the commencement of housing court proceedings” in guidance sent out to landlord attorneys this week. But the association also conceded that — barring a full reopening of the housing courts — new cases “are destined to languish for quite some time.”

That’s cold comfort for many renters who understand that the courts could pull the rug out from under them at any moment. Peña, who worked at a barber shop that shuttered as a result of the pandemic, should qualify for eviction protection under the Tenant Safe Harbor Act if a nonpayment case is brought against him, but he’s unsure how he’ll make up the rent he owes. He also fears that, if forced to appear in housing court, he may risk exposing himself to COVID-19 and — even worse — bringing it home to his 74-year-old grandmother.

“I’ve already lost my dad. I don’t want to lose my abuela too,” says Peña, who has interacted minimally with his landlord since June and is in the process of consulting with a lawyer. “I can’t sleep; the future is always on my mind. It’s so hard to figure out what’s happening.”

According to Josephson, Cuomo’s Monday order triggered a couple of days of “everybody running around in circles,” as lawyers awaited clarity from Judge Marks.

A change that is particularly concerning to advocates is that the Tenant Safe Harbor Act is mum on the fate of tenants who received eviction warrants in early March. Those tenants are, for the time being, protected from losing their homes, but attorneys say they, along with anyone else who is unable to pay rent after the full reopening of their region, will be vulnerable to eviction when proceedings eventually resume.

The courts are currently mulling how exactly cases will play out once hearings move forward; settlement conferences have, for the past few months, been conducted over Skype to reduce traffic in the courts. But that may be about to change. In an email to tenant attorneys on Thursday morning, New York City Civil Court Administrative Judge Anthony Cannataro announced that “in-person trials of pending Housing matters will resume” in Brooklyn “on or about” July 27.

Those proceedings, which seem to conflict with Judge Mark’s Wednesday guidance preventing cases from progressing, will focus on eviction cases that were calendared prior to March 16, before Cuomo issued the initial statewide eviction moratorium. Three courtrooms that Judge Cannataro described as “large and well-suited for social distancing” have been secured at Brooklyn Supreme Court for such trials.

Office of Court Administration spokesperson Lucian Chalfen indicated that judgments of possession and evictions in these cases could be delayed. “Whether and when those things happen depends on a very fluid set of directives from government and court leaders,” he said. Chalfen also notes that the guidance is only for Brooklyn, though other boroughs will soon follow “incrementally.”

“Members of our community are already hanging on by a thread and would not be able to withstand the pain and instability that an eviction would cause,” Myrie said in a statement. “This legislation would provide a stopgap measure as our economy stabilizes and New Yorkers begin the critical work of dismantling systems of oppression throughout the state.”