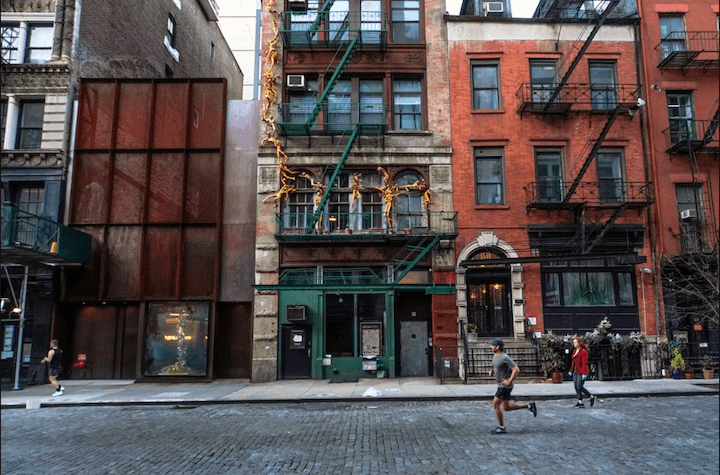 A once-forgotten part of the city, the neighborhood north of Houston Street now has a vibrant retail and cultural scene — and some of the priciest housing.

Ara Fitzgerald moved into a spacious apartment in NoHo in 1971, when the area north of Houston Street did not yet have that name and was considered dangerous territory.

“It was kind of a no-man’s land,” said Ms. Fitzgerald, 73, a dancer and choreographer.

But it was becoming a haven for poor artists — and the rent was $161. She and a roommate “jury-rigged a shower, and it was home.” 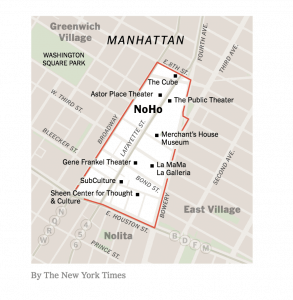 It still is. In the 1990s, she and some neighbors bought the building for “not very much” and turned the historic structure, once a home for unwed mothers, into a self-managed co-op. After raising two children, who are now both artists, Ms. Fitzgerald lives there with her second husband, Peter Cunningham, 72, a photographer, making films in the home’s studio that she writes and performs in, and he films. Their latest is about P.T. Barnum.

Once a “forgotten part of New York,” she said, NoHo gained “cachet as a creative neighborhood,” with special rules for “certified artists” who could legally use their apartments, often lofts in former commercial buildings, as live-work spaces. Then people with money started coming in.

“NoHo is now a new kind of neighborhood, vibrant and always changing,” she said. “It’s a fascinating place to be.”

A turning point came in 2007, many residents agree, when Ian Schrager built a glassy luxury condo, with doormen and amenities, at 40 Bond Street. Transformations have continued since, with a burst of new buildings or conversions within the last few years, including three on Bond Street, four on Great Jones Street and two on Bleecker Street, one of which hasn’t opened yet. Another building on Bleecker is headed for demolition, to be replaced by a taller residence.

“I’ve seen a lot of change, especially on the Bowery,” said Mary Clarke, 69, who started renting a NoHo apartment (now rent-stabilized) in 1979 with her husband, Bill Komoski, a painter, now 65. Ms. Clarke, then a photographer and dancer, is now executive editor of Bridal Guide magazine.

The Bowery “caught fire quickly,” she said, with new restaurants and retail stores that have made life easier.

The debut of the copper-and-steel 40 Bond Street “changed people’s view of our neighborhood,” said Donald Capoccia, 64, a longtime resident and real estate developer who has transformed two buildings in NoHo.

Mr. Capoccia became familiar with the area after studying it during his last semester at Hunter College, where he was earning a master’s degree in urban planning. “Yes, I’m here because of a homework assignment,” he said.

He now lives with his husband, Tommie Pegues, in a triplex penthouse on Great Jones Street that stretches across two buildings — an older one and a new one he finished developing about six years ago. Mr. Capoccia, who is also the treasurer of La MaMa Experimental Theater Club, which has an art gallery at 47 Great Jones Street, said he likes the growing “vibrant retail and restaurant scene” that draws people to the neighborhood, including students from New York University, which has a few buildings in NoHo: “It’s the ideal of having a community where you can live and work and create.”

Once considered part of Greenwich Village, NoHo has in recent years emerged as a distinct neighborhood defined by its mix of older buildings, some of them former factories or warehouses, and new or converted structures designed by well-known architects. It is bounded, by one commonly accepted definition, by Houston Street on the south, Broadway on the west, East Eighth Street on the north and, on the east, the Bowery, which becomes Cooper Square north of East Fourth Street. Broadway, Lafayette Street and the Bowery are its commercial arteries.

Three historic districts, the newest created in 2008, cover much of the area, keeping most buildings at six stories or fewer. Cobblestones distinguish Bond Street, home to some of the area’s most admired buildings, including one adorned in sculptures of golden dancing figures. A city planning report released in November called Envision SoHo/NoHo has started discussions about rezoning. One aim, according to the report, is “to promote more diversity and more equity in SoHo/NoHo.”

“It’s a supercool neighborhood,” said Raymond Chalme, the chief executive of Broad Street Development, which in 2016 acquired two “nondescript” buildings on Mulberry Street, turning one into a sleek rental property, and building a new 12-story condo (only three stories higher than its neighbor, Mr. Chalme pointed out), slated to open in a few months, on the site of the other. Its address has been changed to 40 Bleecker Street, the street it now faces.

Mr. Chalme tried to make both buildings feel modern, but with a nod to the area’s “rich history,” he said. “The neighborhood has soul.”

Robert Dankner, the president of Prime Manhattan Residential, a real estate agency specializing in luxury properties, said prices in NoHo by square foot are slightly higher than those in neighboring SoHo and Greenwich Village, because of the area’s “chic coolness” and historic districts that limit new construction, which might change its character.

Other changes have come, however, thanks to the Covid-19 crisis. Because the city’s shutdown rules prohibit brokers from showing apartments in person, Mr. Dankner said, “the market has literally stopped,” which has “compelled some sellers to take their properties off the market until the dust settles.”

In mid-March, before the quarantine, 36 apartments were listed for sale on StreetEasy; three weeks later, there were 28. Of those, the least expensive was a studio co-op at 308 Mott Street, a sixth-floor walk-up in a building with a live-in super, listed for $625,000; the most expensive was a four-bedroom, three-and-a-half-bathroom duplex penthouse condo at 56 Cooper Square, with a private terrace, a keyed elevator and a wood-burning fireplace, in a building with a full-time doorman, listed for $9,999,999.

As for rentals, NoHo has for some time had the city’s highest year-over-year price increases, about 5 to 6 percent, said Adrian Savino, the leasing director of the Living New York real estate agency, who attributed that to the neighborhood’s appealing “old-school artistry” and the paucity of available apartments. “There’s not a ton of product,” Mr. Savino said.

Now there is even less. “Landlords are becoming more flexible with lease terms or going month to month,” he said, to hang onto the renters they have or to encourage a quick turnover.

In mid-March, there were 15 rentals available; as of early April, there were 12. The least expensive was a one-bedroom, one-bathroom apartment at 302 Mott Street, with a live-in super, a virtual doorman and laundry in the building, for $2,595; the most expensive was a duplex penthouse in a 2010 condo building at 41 Bond Street, with two bedrooms, two full and two half bathrooms, three terraces, one balcony and a private elevator, for $40,000.

With its historical ties to artists like Andy Warhol, Jean-Michel Basquiat and Robert Mapplethorpe, as well as theatrical and fashion icons, NoHo is a hub for culture — all of it, of course, currently on pause because of the coronavirus.

The traffic circle at Astor Place is home to a rotating sculpture by Tony Rosenthal commonly known as “The Cube.” It stands just north of the Public Theater, which is across the street from Colonnade Row, a landmark building that once housed the Astor and Vanderbilt families and is now home to the Astor Place Theater. Other theaters in the area include the Gene Frankel Theatre on Bond Street and the Sheen Center for Thought and Culture on Bleecker Street. 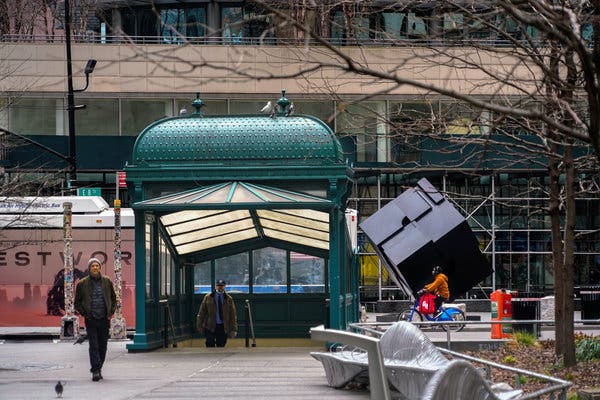 The Merchant’s House Museum on East Fourth Street, Manhattan’s first landmark building, was built in 1832 and was home to a prosperous merchant family and their Irish servants for almost 100 years. The museum has been fighting a proposed eight-story hotel next door, where a six-story garage now operates, fearing the construction could cause damage to the house. The matter is now in court.

New stores include a trendy three-story Kith sneaker and clothing emporium that, residents say, often has lines out the door (although not at the moment). The once-scruffy building formerly housed activist groups and was informally called “the peace building” and “the socialist building.”

NoHo now even has its own private membership club, said Fredrik Eklund, a real estate broker who is marketing the 40 Bleecker Street condo. Called Zero Bond, it is “one more example of the evolution of this neighborhood,” he said. “I never would have believed it, but now it feels right.”

P.S. 003 Charrette School, for which most neighborhood homes are zoned, has 719 students in prekindergarten through fifth grade. According to the 2018-19 Quality Snapshot, 74 percent of students met state standards in English, compared with 48 percent citywide, and 78 percent met state math standards versus 50 percent citywide.

Residents praise the options, including walking. The B, D, F, M, N, Q, R, W, 4 and 6 subway lines make full or part-time stops. Traveling from the Broadway-Lafayette station to Bryant Park takes about eight minutes on the B, D, F or M.

The Astor Library, the imposing building that is now the Public Theater on Lafayette Street, opened as a free library in 1854, thanks to a bequest from John Jacob Astor. In 1895, it became the home of the New York Public Library, which stayed there until its 1911 move to Bryant Park. In 1921, the building was bought by the Hebrew Immigrant Aid Society, but by the 1960s it was destined for the wrecking ball before being saved by a city landmark designation and its sale to the New York Shakespeare Festival, headed by Joseph Papp. The Public opened in 1967 with the world premiere of the musical “Hair.”