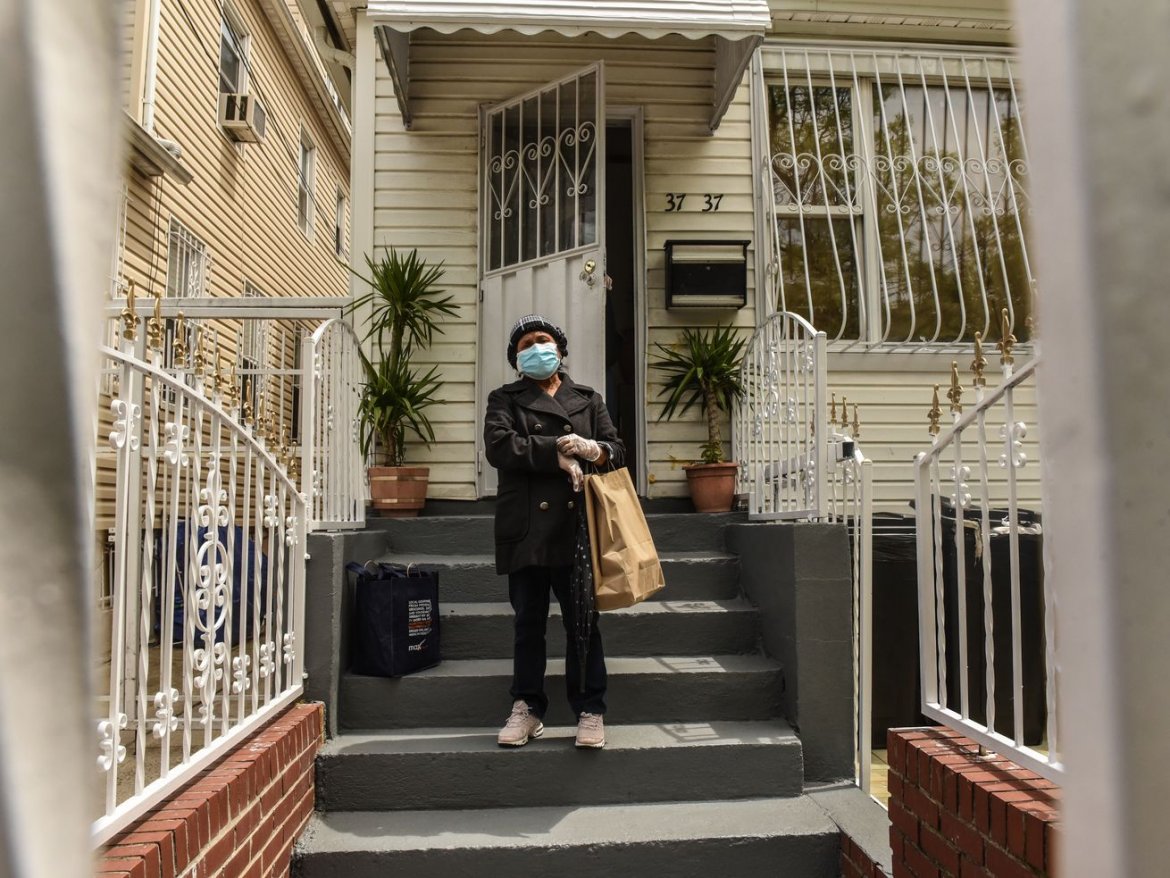 NYC immigrants fear losing their homes during the pandemic 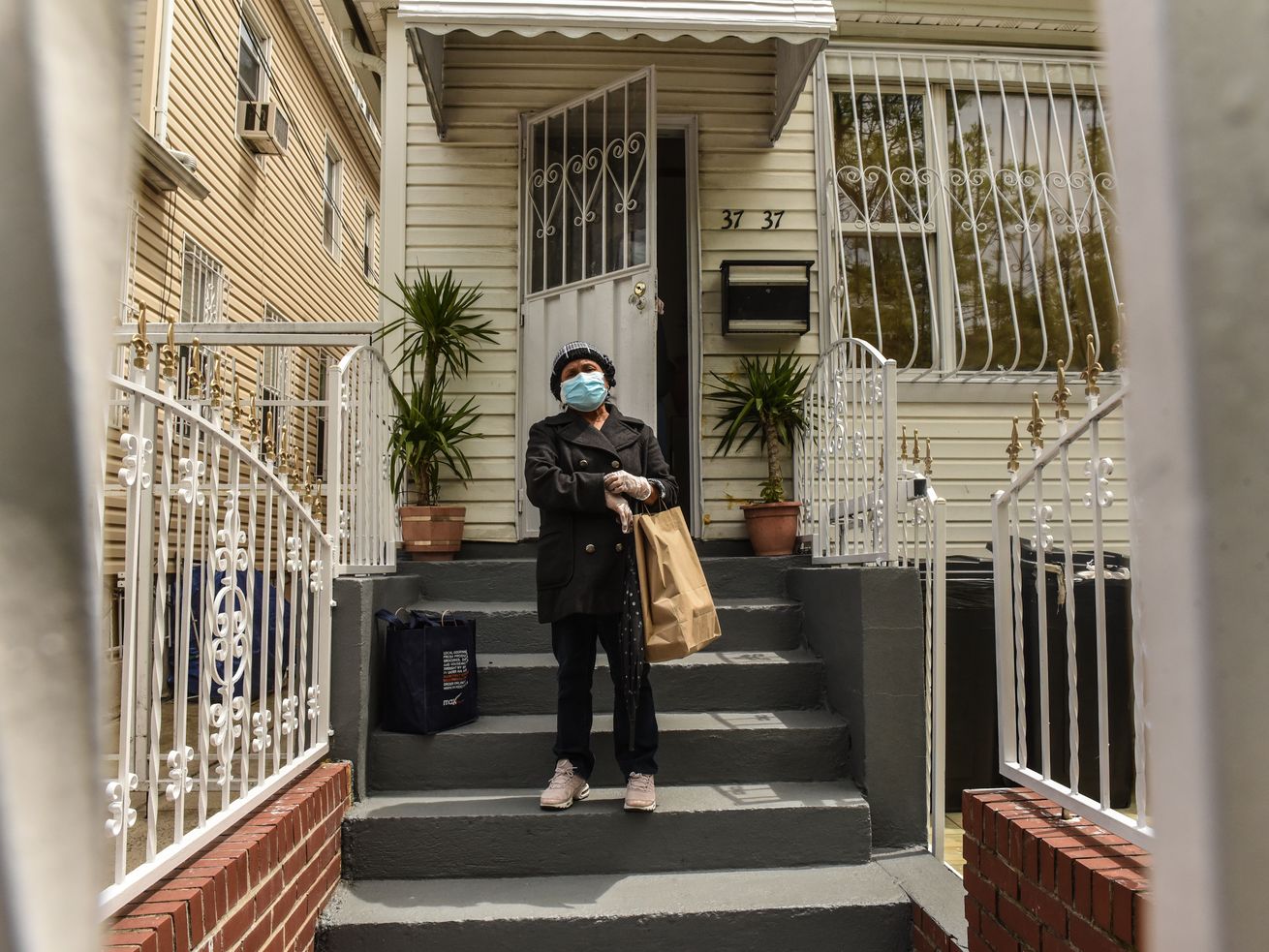 A woman with a food donation returns home to the Queens neighborhood of Elmhurst, one of the neighborhoods hardest hit by coronavirus in New York City. | Photo by Stephanie Keith/Getty Images

Lourdes Escobar, a street vendor who lives in Elmhurst, Queens, has already packed her bags. She hasn’t been able to work since March because of the coronavirus pandemic, so she hasn’t been able to pay rent for the past two months. If Escobar gets kicked out of her apartment, she’ll be ready to go.

Escobar, who was born in Mexico and has been in the U.S. for nearly 30 years, has earned a living as a home caregiver and, most recently, by selling food on the streets. Before the coronavirus hit, the 69-year-old had a routine: She would go to the grocery store, then head home to cook tamales, and in the afternoon, “at three or four, I leave and I spend the whole night outside,” she says in Spanish. She would stand with her cart on Roosevelt Avenue selling tamales until around 5 a.m.

Because of the pandemic, that routine is shot. She’s scared of getting infected, and after noticing a decrease in sales owing to less foot traffic on the streets, she stopped going out. Now, like many fellow street vendors and other immigrant workers, she is struggling to make ends meet. Escobar, who lived on the street for six years, is particularly afraid that she will lose her apartment and become homeless again.

To complicate matters, the apartment where she’s lived for the past ten years is located in Elmhurst, which has been deemed the epicenter of the virus in New York City. “I turn around and wherever I look, a lot of people have passed away, people with families … It’s affected all of us,” Escobar says. Several of her fellow vendors who would stand next to her on the streets have passed away.

The novel coronavirus has disproportionately affected communities of color like Elmhurst. According to New York City data released on May 18, working-class and lower-income neighborhoods like Canarsie-Flatlands (East New York) in Brooklyn and the Rockaways in Queens, which are predominately nonwhite, saw the highest death rates. The data also showed that black and Latino New Yorkers are dying at twice the rate of white individuals.

The economic effects are similarly lopsided: A survey conducted by nonprofit Make the Road New York in late April showed that out of the 244 respondents (most of them Latinos and all residents of Queens, Brooklyn, Staten Island, Long Island, and Westchester County), 92 percent said they or someone in their household had lost their job or income because of the crisis, and 89 percent said they were worried about paying May rent.

Residents of these communities were already rent-burdened before the pandemic, facing the effects of a deepening affordability crisis in New York City: “Housing inequities in the neighborhoods that survey respondents call home existed long before the coronavirus came to New York,” the report reads. “Sheltering in place has shone a bright light on the challenges … and, especially when it comes to housing costs, has exacerbated them.”

That was the case for Ana, an undocumented mother of two living in Brooklyn (her name was changed for anonymity purposes), who for the past three years has had to deal with harassment from her landlord—even when she was pregnant with her second child.

“[One day] he came to knock on my door. I didn’t know what was happening … He started to curse at me in English, and he said he would call inmigración [Immigration and Customs Enforcement] if I didn’t leave … I was shocked, panicked,” she recalls.

As the virus began to take hold in New York, things escalated: She had to call 311 to get her windows fixed, and three days later, on March 12, her partner was arrested by ICE in retaliation, she suspects. The 32-year-old depended on him financially, so she doesn’t have any source of income to take care of her two boys, who are 9 and 18 months old.

“It’s really hard [to pay rent] because now, more than anything, I’m a little bit sick … In December, I got sciatica, and it’s really painful, and the only person that supported me was my partner. He would support me financially, and now with everything that’s happening with the virus … there’s uncertainty. It’s hard,” she says.

Undocumented individuals across the city are facing a harrowing situation: Many of them are considered essential workers (working in restaurants, hospitality, and child care) and are facing a higher risk of getting infected, while others have lost their jobs or had their hours cut. A recent study estimated that around 192,000 undocumented New Yorkers have lost their jobs.

But because of their status, they’re not eligible for any kind of government assistance, the federal stimulus checks, or unemployment insurance. And their immigration status makes them even more vulnerable to being harassed by their landlords.

Attorney Jennie Stephens-Romero, who works for Make the Road NY, is working on Ana’s case but says that her usual tactics have been blunted by the pandemic. Under normal circumstances, when a tenant is being harassed, Stephens-Romero would take certain measures like file a complaint. “We can’t really do that right now because the courts are closed, and a lot of the state agencies that we go to to file the complaints are closed,” she says. “So she really feels trapped right now and, again, that situation is made so much worse when you are undocumented and you don’t have eligibility for a lot of services.”

Stephens-Romero says that attorneys at Make the Road have reassured individuals that, because of Governor Andrew Cuomo’s eviction moratorium, they can’t be evicted from their apartments at the moment. In terms of harassment instances, Stephens-Romero notes that the courts are still hearing emergency cases, like a tenant being locked out of her apartment by a landlord; but for situations that can’t be taken to court now, she says it’s always a good idea “to keep evidence of the harassment, take videos, text messages” for future legal action.

Several nonprofit emergency relief funds, including the Street Vendor Project and from Make the Road NY, have provided some respite. However, advocates say that’s not enough and shouldn’t replace help from the state and federal government.

Activists with nonprofit New York Communities for Change (NYCC), along with other organizations, are now calling on Governor Cuomo to provide “Recovery for All” and issue an executive order to enact legislation pending from the State Senate: a $3.5 billion excluded-workers income-replacement fund for immigrant-workers bill; to cancel rent, mortgage, and utility payments during the pandemic; and to rehouse homeless New Yorkers.

Escobar says all she wants at the moment is to get back to Roosevelt Avenue to sell her tamales, but she loses hope sometimes: While the rich get richer, she says, “no one’s going to forgive even half a month of rent.”