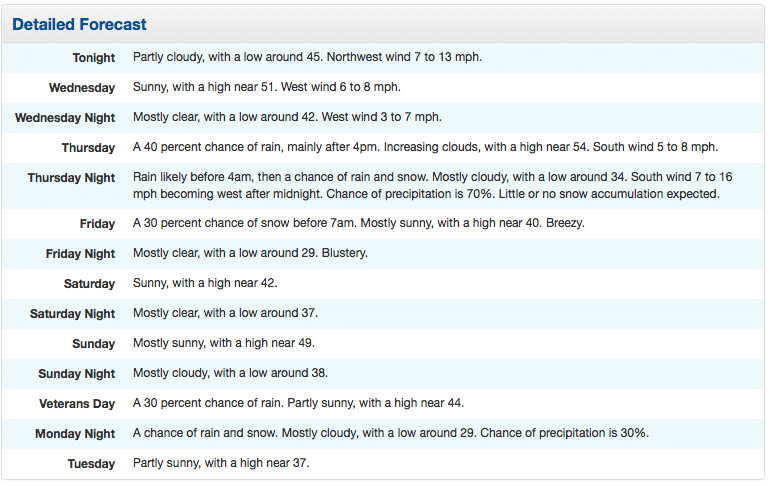 NYC May Get Snowfall Over The Next Week

Depending on which forecast you look at, it appears that there’s a slim chance of snowfall expected for NYC next week…but it certainly isn’t expected to be a snow storm by any means.

According to reports by the National Weather Service, AccuWeather, and The Weather Channel, New Yorkers may see some snowfall early next week. The National Weather Service forecast states that there is a chance of “rain or snow” late Thursday night/early Friday morning (of this week!), but with a low of 34 degrees they also note that there will be “little or no snow accumulation expected.” The forecast then proceeds to note that there will be a 30% chance of precipitation again (which can be rain or snow) on Monday night,  November 11, with a low of 29 degrees expected.

The Weather Channel echoes that forecast (although slightly differently), claiming that NYC has a 30% chance of experiencing “scattered snow and rain showers” early next Tuesday, November 12.

However, upon checking AccuWeather, it seems rain in possible next possible next Tuesday morning, but there’s no direct mention of snow…

So, honestly, only time will tell which forecast is accurate but one thing is certain: the next week will bring plenty of mixed weather.

The post NYC May Get Snowfall Over The Next Week appeared first on Secretnyc.