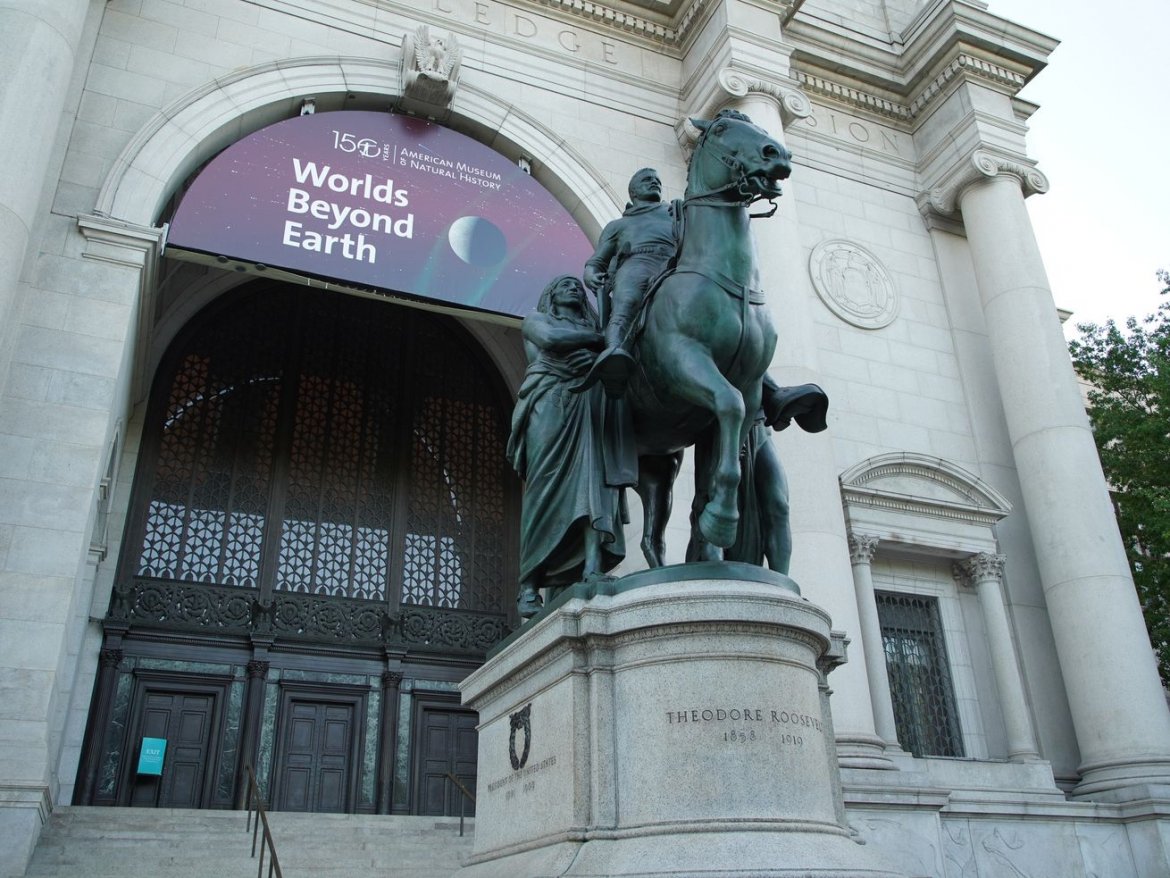 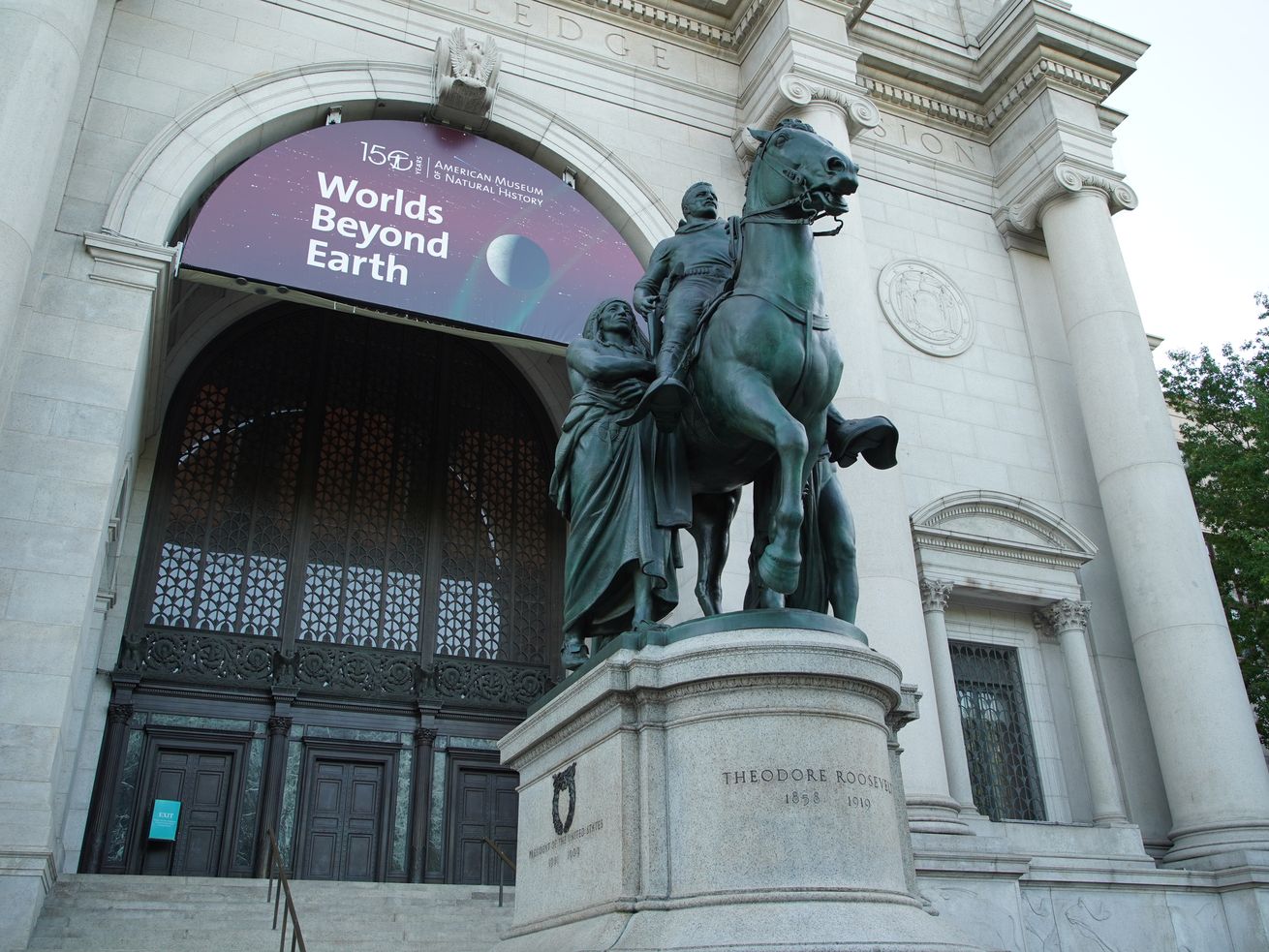 NYC activists have long called for the removal of the monument.

For several decades, activists have fought for the city to remove the statue of Theodore Roosevelt from the American Museum of Natural History’s (AMNH) entrance. The bronze monument shows the former president on top of a horse with two figures standing below him: an African man on one side and a Native American man on the other. The monument portrays Roosevelt as superior to the two men, serving as a glaring reminder of the white-supremacist views he held.

Now, amid waves of protests against racism and police brutality, and demonstrators taking down Christopher Columbus and Confederate monuments across the country, AMNH announced that it has called on the city (which owns the land on which the statue sits) to remove the Roosevelt statue.

“Over the last few weeks, our Museum community has been profoundly moved by the ever-widening movement for racial justice that has emerged after the killing of George Floyd,” a memo to staff read. “We also have watched as the attention of the world and the country has increasingly turned to statues and monuments as powerful and hurtful symbols of systemic racism.”

Roosevelt’s statue — along with many others, including the one of Columbus that stands on Columbus Circle — has sparked controversy and debates because of the racist ideals it represents. Back in 2017, the same year the city began a review of the Roosevelt monument through Mayor Bill de Blasio’s “symbols of hate” task force, the statue was vandalized with red paint. At the time, the Mayoral Advisory Commission on City Art, Monuments, and Markers considered taking down the statue — along with two other NYC monuments — but didn’t reach a consensus on it.

One of the local groups that has long advocated for the Roosevelt statue’s removal, Decolonize This Place, cites Roosevelt’s role in the colonization of Puerto Rico, the Philippines, and Guam, along with one of his quotes discriminating against the indigenous population, as reasons why it should be taken down. “I don’t go so far as to think that the only good Indians are dead Indians,” the 26th president said in 1886, “but I believe nine out of ten are, and I shouldn’t like to inquire too closely into the case of the tenth.”

“In no way is it ever okay for two nearly naked, ‘savage’ men (figures of one Indigenous and one African) to be standing at the feet of and in service of a colonizer,” a statement from the group reads.

Last year, AMNH opened an exhibit called “Addressing the Statue” about the history of the monument and what it symbolizes today. Historians and African-American-studies scholars weighed in on Roosevelt’s legacy and racist views.

“Yes, I would absolutely call Theodore Roosevelt a racist. He had very specific views around which races — the Nordic, the Alpine — were going to lead [American] civilization forward,” Mabel O. Wilson, Columbia University professor of architecture and African-American studies, said in an exhibit recording.

But the museum, as the institution acknowledged in its official statement, has deep ties to the Roosevelt family, and his great-grandson, Theodore Roosevelt IV, serves as a trustee for AMNH. The museum said it would name its “Hall of Biodiversity” after him.

In a press conference on Monday, de Blasio said that he supports the museum’s decision to remove the statue.

Activists at Decolonize This Place have now emphasized that it’s important for New Yorkers to have a say in what happens to the monument, and that site, next: “Communities must be involved as stakeholders in both what happens to the statue after it is removed and in what takes its place.”